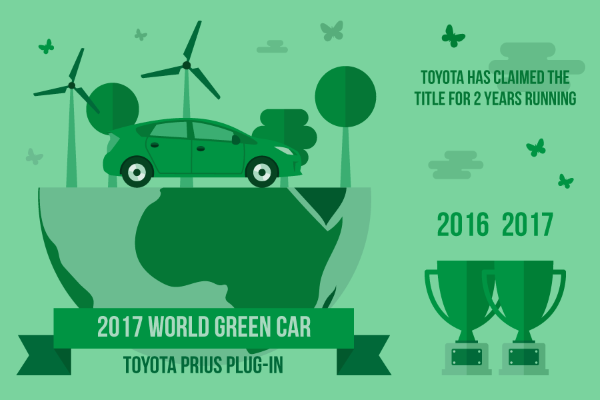 The Prius’ triumph means that Toyota has claimed the title for two years running after the hydrogen-fuelled Mirai came out on top in 2016.

The Prius Plug-In’s powertrain brings together a 1.8-litre petrol engine and two electric motors, driving the front wheels, to achieve a combined fuel consumption of 282mpg and CO2 emissions of just 22g/km.

Additionally, the car can drive on electric power alone for more than 30 miles before propulsion is drawn from the petrol engine.

“For global automakers like Toyota, this award is a testament to our focus on developing products that both stir the emotions and meet the mobility needs of our customers in all corners of the world.”

Stephen Hasley, brand manager at the Green Journey, adds: “There were some strong names in this year’s World Green Car group and after going 11 years without a win, it’s amazing to see Toyota bag the award twice in two years.”